The World Health Organization (WHO) recommends mothers to exclusively breastfeed infants for the first six months of life. After six months, other liquids and foods are given to the infants and the frequency of breastfeeding is reduced. However, breastfeeding up to two years of age is recommended.

Reasons for choosing formula-feeding include:

How to Choose the Right Infant Formula

Various types of infant formulas are available in the market. Some infants require specialized formula, for example-

The nutritional requirement for every infant is different, therefore, parents must carefully choose the right type of infant formula for their little one.

Here are types of infant formulas available in the market:

Cow milk formula is one of the commonly used formulas for your little one. It is made from the proteins of cow’s milk and these proteins are modified in such a way that it is easier to digest for the babies. The composition of this formula is similar to the breast milk. Hence, the majority of the babies thrive on cow’s milk formula.

These soy-based formulas were not accepted by parents and they complained about loose stools, diaper rash and stained clothing. Vitamin K deficiency was reported in infants who were fed soy-based formulas. This is because soy protein eliminates most of the vitamin K in soy. 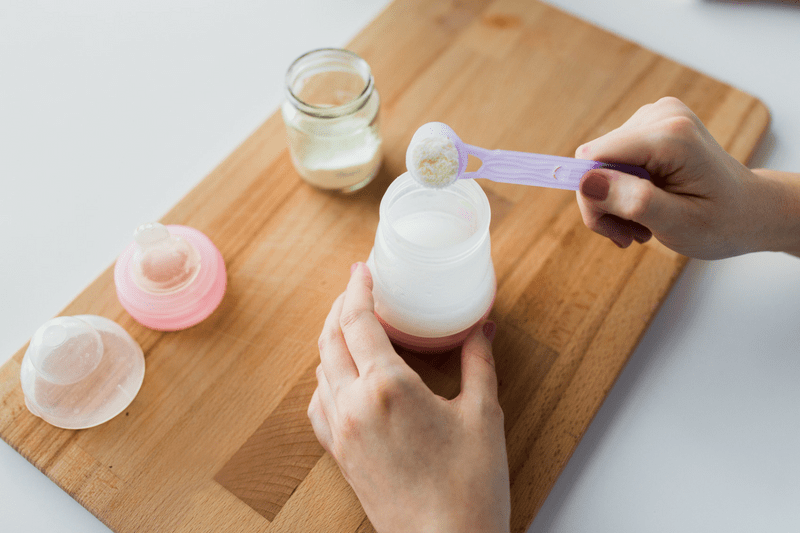 Whey protein hydrolysate formulas are specially designed for infants who are intolerant to cow milk protein or soy protein. Symptoms of gastrointestinal intolerance to the protein in infants include:

Hydrolyzed formulas provide a complete and well-balanced nutrition to infants who cannot digest the intact protein.

In these formulas, proteins are broken down into smaller pieces so that they are easily digested. They do not add an extra pressure on the baby’s stomach.

Preterm infants are usually underweight and weak. Therefore, their nutrient requirements are higher. They are also at an increased risk of allergies or intolerances.

According to research, a preterm formula is intended to provide nutrient intakes to match intrauterine growth and nutrient accretion rates.

The infant’s growth and development are closely monitored by a pediatrician. If the baby is healthy, the pediatrician may shift the infant from the special formula to a standard one.

In What Forms are Infant Formulas Available

Instructions on how to prepare the formula are mentioned on the formula bottle or packet.

When preparing a powder formula, one scoop of the powder needs to be added to one or two ounces of water, as mentioned on the pack and shake it well in a bottle.

While making a concentrate, mix equal parts of the formula and water and mix thoroughly.

Ready-to-feed as the name suggests is ready to use. You do not need to add anything to it.

Once the formula is prepared, do not keep it at the room temperature for more than an hour.

Once heated, the formula can be stored at the room temperature for an hour. Re-heating it may lead to harmful bacterial growth.

Any leftover formula milk should be discarded and should not be re-used or stored.

The composition of Infant Formulas

Breastfeeding is an ideal form of infant feeding. The main aim of the industry is to prepare infant formulae that meet the nutritional requirements and to promote normal growth and development of the infants for whom they are intended.

Infant formulae should contain only those components that serve a nutritional purpose or provide health benefits to the infant. The inclusion of unnecessary components or improper amounts of components may add an additional pressure on the metabolic and physiologic functions of the baby.

100 ml of an infant formula should provide minimum 60 calories and maximum 70 calories. Besides macro and micronutrients, other ingredients are added to provide benefits similar to the breastfed babies. Here is what an infant formula contains:

Research has found that as general sanitation measures improved and the differences in composition between human milk and that of other mammals were defined, feeding animal milk became more successful.

The birth of the infant formula industry took place in the 1920s. The modern commercially prepared formulas were introduced with nonfat cow milk, lactose, vegetable oils, iron, calcium and phosphorus.

The protein content is diluted because of the immature renal tubular system of the infant. Iron was first added in 1959 to reduce the risk of iron-deficiency in formula-fed infants. Long chain fatty acids were recently added to these formulas in an effort to improve visual and cognitive development in infants.

It was believed that the quality of cow’s milk protein was far inferior compared to human milk protein. Therefore, high level of protein was added to infant formulas to meet the infant requirements.

However, this increased the additional load on the immature kidneys of the infants.

Furthermore, it was recognized that whey protein is predominant in human milk, whereas caseins are higher in cow’s milk.

In the year 1962, formulas with a whey : casein ratio similar to human milk were introduced. Whey-predominant formulas began to gain popularity by 2000.

Nucleotides, the basic structural unit of DNA became an important component of infant formulas. According to research, nucleotides may act as growth factors and may have immunomodulating effects on the immune defenses.

Some parents want to prepare their own organic formula feeds for their little one. But, buying a commercial formula feed is better because it is approved by FDA and it is nutritionally balanced.

On the other hand, home-made formula feeds are less expensive and healthier because parents know what it is exactly made up of.

However, experts recommend that home-made feeds are not nutritionally balanced and the risk of contamination is high. But, if some parents still prefer home-made feeds, they can consult their pediatrician and go ahead with it. 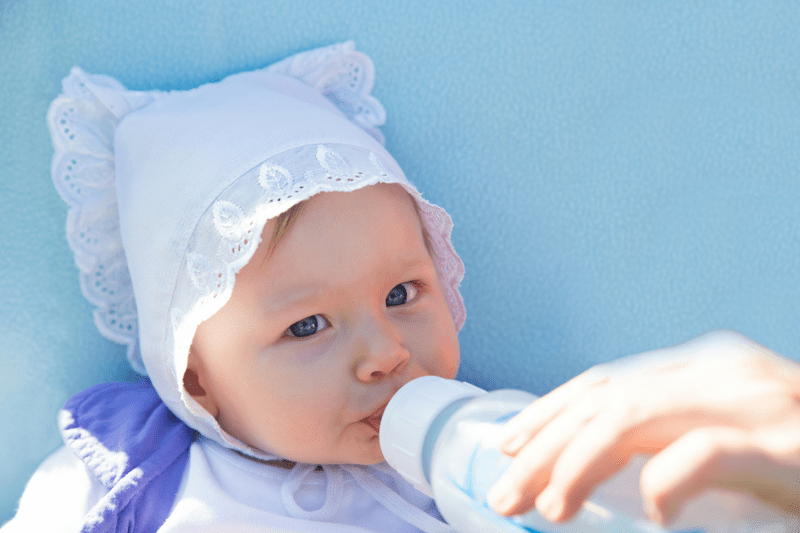 How to Start with Formula Feeds

Infants must be fed formula feeds up to one year of age. Initially, these feeds must be given every 2-3 hours. Start with 60-90 milliliters of formula at one go. In an entire day, an infant must consume 480-720 milliliters of the formula.

Similar to breastfeeding, as the baby grows older, the number of feedings decreases. But, the quantity of formula given at one go will increase.

After 6 months of age, other liquids and solid foods are introduced and the quantity of formula feeds is further reduced.

Formula feeds are more prone to bacterial growth as compared to breastmilk. Therefore, parents need to be more careful while preparing and feeding their little one.

During the first six months, the bottles in which the feeds are given should be sterilized before and after use.

Parents or whoever is feeding the infant should wash their hands with hot soapy water before preparing the feed and before feeding the little one.

Water used to prepare the formula feeds should be boiled properly and then strained. This water is then safe to use for your baby.

Benefits of Meditation during Pregnancy

Causes of Infertility in Women